Åkestam Holst and Swedish Television roll out a campaign about the need for factual journalism (with cameos by Boris Johnson, Putin and Trump) 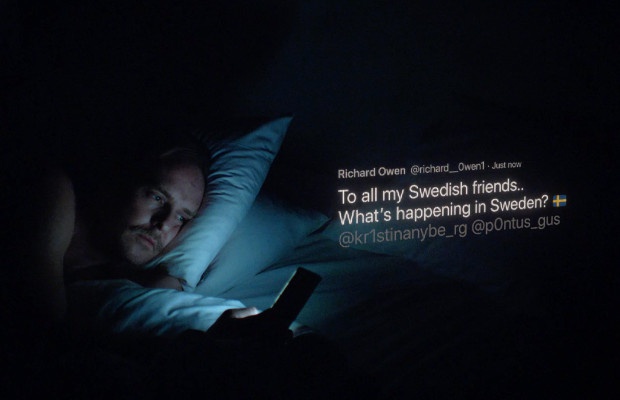 SVT (Swedish Television) is the public service broadcaster of television in Sweden, similar to the BBC in the UK.
In a new initiative, SVT aims to show how the need for all the things that public service provides and guarantees might be greater than ever in the digital age.
The campaign has been produced in collaboration with agency Åkestam Holst and production company Acne Film.
In this first film, the focus is on the growing need for factual journalism in a world where digital misinformation is on the rise, and the responsibility everybody today shares for fact-checking and thinking twice about we share - as citizens, journalists or even as powerful world leaders.
The film follows how a simple prank video uploaded to Swedish social media through a series of misunderstandings, exaggerations and purposeful distortion is transformed into a global news story about a mysterious chicken epidemic in Sweden. Along the way, everyone from regular people, insufficiently cautious journalists and figures like Xi Jinping, Boris Johnson, Vladimir Putin and Donald Trump play a role in turning a rumour into a perceived fact.
The launch of the campaign has continued the debate on the role of Sweden’s public service in the future, and as intended has provoked multiple reactions from both its defenders and its critics – across Twitter, newspaper editorials and several major television programs.
The campaign has been praised, criticised, parodied and discussed all across Sweden, and also created a larger awareness of the need for factual journalism in the future, in a climate where digital rumours can easily run rampant.
The story is loosely based on an old Swedish proverb - “to make a hen out of a feather”, meaning to exaggerate and deviate from the truth, similar to the English expression of making a mountain out of a molehill.
The film is a cinematic high-tempo story with clear fictional elements  - both to avoid confusion with actual news, but also to dramatise the real, continuous and slow-working disintegration of trust caused by fake news and the many stories that play fast and loose with the facts.
The main purpose of the film is to highlight the great need for factual journalism in the digital media landscape – no matter whether its provided by public service actors like SVT, reliable commercial actors or freelance journalists applying good journalistic methods.
In general, the journey of producing the film has been an eerie story of life imitating art.
During production of our chicken-heavy film, that has some key scenes take place in the UK, we watched as UK prime minister Boris Johnson called his main rival ”a chlorinated chicken” and gave a UN speech about “terrifying limbless chickens”.
And most amazingly, real fake news appeared to imitate our fictional fake news in real-time.
During the launch week of the film, a person in the Swedish city of Malmo was prematurely misdiagnosed with ebola in an international news story shared by many UK tabloids and global news providers. Claims of a Swedish ebola epidemic ran rampant on alt-news sites, even after both SVT and the BBC had published stories debunking the claim.  And one fake news profile recently banned from Facebook actually shared the Malmo story the day after it had been debunked using the quote “Last night in Sweden..."- the same quote used towards the end of the SVT film.
The film is the first in a longer series about the role of SVT and public service in the digital world.
The whole campaign currently runs nationally on TV, cinema, OOH, YouTube and Facebook in Sweden.

More from The North Alliance

This 7-Eleven Christmas Jumper Can Sense How You Feel