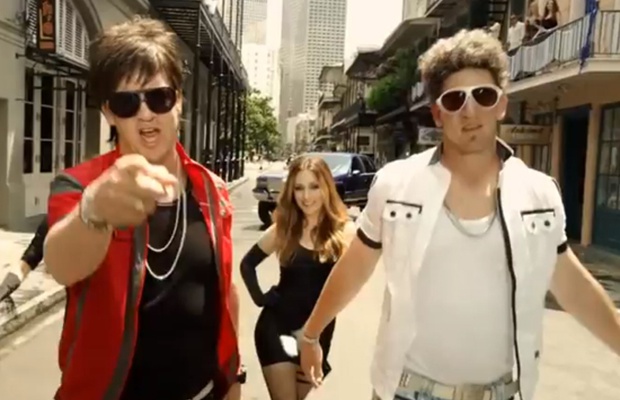 As NFL fans ramp up for football season, they will find a hilarious off-the-field distraction in Football on Your Phone, a new DirecTV spoof starring quarterback brothers Eli and Peyton Manning. The maestros at Butter, via Grey, are behind the 3:00 promo, which has already shot past 4 million hits on YouTube.

The video rewinds to the 1990s, where an incredulous Peyton discovers his brother Eli watching NFL games on his cell phone. Decked out in ‘90s gear and sporting that decade’s over-the-top haircuts, the two launch into an old-school hip-hop duet, backed up by brass hits, bass slides, chimes, and an MPC drum beat, not to mention a trio of black-clad songstresses. The video frolics from New Orleans’ French Quarter to high-end cocktail parties, taking shots at everyone from Alexander Graham Bell to a bystander using his “phone as a phone.”

Having just worked with Butter on a funny Dairy Queen spot, Grey Group CD Steven Fogel approached them to create a jingle from his agency’s rough outline and script. Butter created several treatments of the song, ultimately settling on a “football on your phone” hook that was appropriately raunchy and catchy.

One of the project’s highlights was working with the Manning brothers. “Working with Peyton and Eli was amazing,” Butter EP Ian Jeffreys notes. “They are true professionals. They drove three hours to get to an eight-hour shoot, where they had to get into costume and makeup, shoot the ad, shoot a photo spread, record 19 radio scripts, and record the actual song, which they had never heard before. I was seriously impressed by their work ethic and stamina. There was no drama, no attitude – just get it done.”

Butter showed up on shoot day to find that they were sharing an enormous room with the photo crew and two dozen others, creating a racket that would make it difficult to capture high-quality vocals. Accustomed to finding solutions on the fly, Butter made some phone calls. “Our saving grace was our rental company, Studio 101 NOLA,” Jeffreys recalls. “Our contact there, DJ Boudreaux, found a friend with a collapsible vocal booth. It was pricey, but it was our only shot to do this right – without clean vocals, the whole day would be wasted. So DJ shows up with what looks like a church confessional booth. Apparently, a dentist with a songwriting hobby had his cabinetmaker build a vocal booth in his basement, then sold it when he moved. It was a wacky contraption, but it saved our asses.”